Seven wonders of the world

by Victor Mochere
in Travel
Reading Time: 5 mins read
A A
0

Since before recorded history, humans have left their legacies on the Earth in the form of architectural structures. These have ranged in scope from mounds and simple markers to spectacular feats of construction. For centuries, human civilizations across the world have built and created cities, buildings, monuments, tombs, temples, churches, mosques, and other structures that continue to inspire awe in millions. Many have been destroyed by war or natural disasters, but some survive as ruins, reconstructed replicas or meticulously-maintained structures. Narrowing down the world’s wonders to only seven is a difficult task.

Here are the 7 wonders of the world. 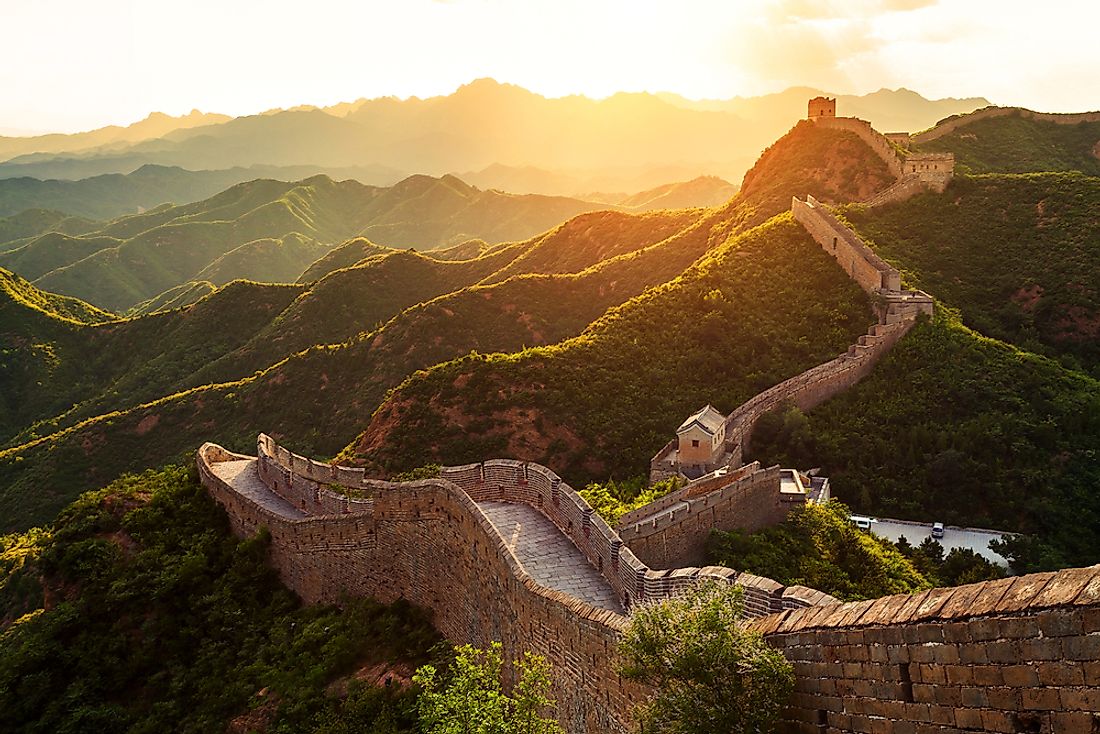 The Great Wall of China is a series of fortifications that were built across the historical northern borders of ancient Chinese states and Imperial China as protection against various nomadic groups from the Eurasian Steppe. UNESCO inscribed the site as a UNESCO World Heritage site in 1987. Several walls were built from as early as the 7th century BC, with selective stretches later joined together by Qin Shi Huang (220-206 BC), the first emperor of China. Little of the Qin wall remains, as nearly nearly one-third of the Great Wall has disappeared over time.

Later on, many successive dynasties built and maintained multiple stretches of border walls. The most well-known sections of the wall were built by the Ming dynasty (1368-1644). Collectively, they stretch from Liaodong in the east to Lop Lake in the west, from the present-day Sino-Russian border in the north to Tao River (Taohe) in the south; along an arc that roughly delineates the edge of the Mongolian steppe; spanning over 20,000 km (12,000 mi) in total. Today, the defensive system of the Great Wall is generally recognized as one of the most impressive architectural feats in history. 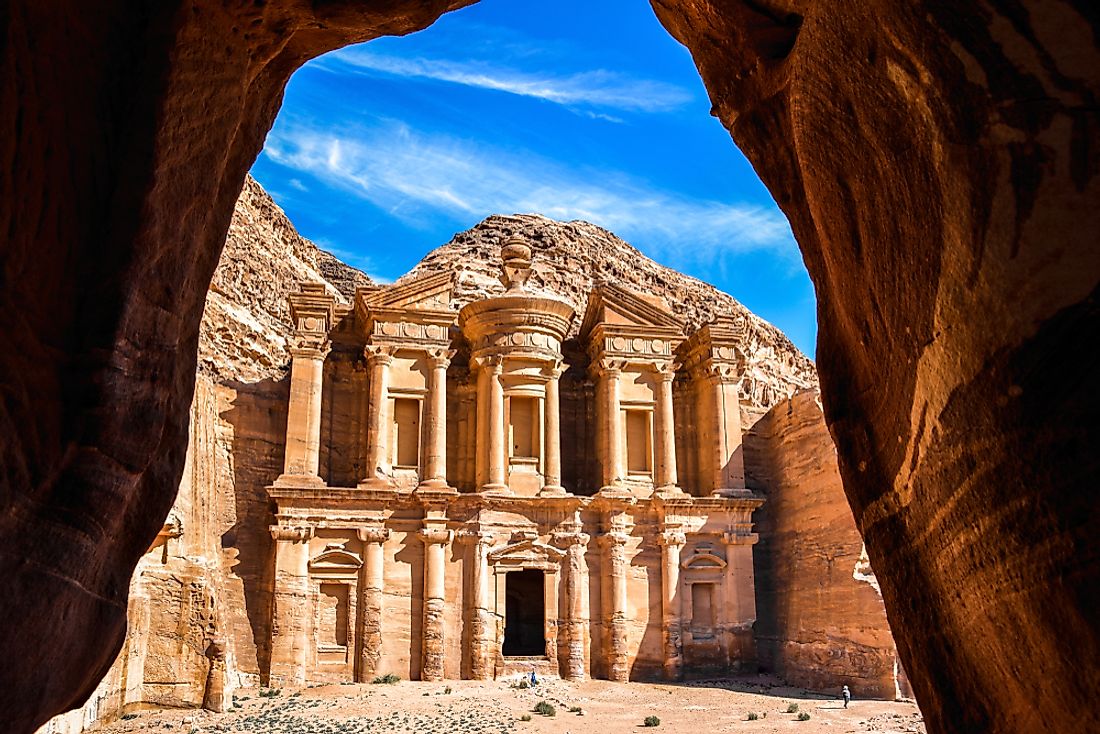 Petra is a historic and archaeological city in southern Jordan. It is adjacent to the mountain of Jabal Al-Madbah, in a basin surrounded by mountains forming the eastern flank of the Arabah valley running from the Dead Sea to the Gulf of Aqaba. It has been a UNESCO World Heritage Site since 1985. The area around Petra has been inhabited from as early as 7000 BC, and the Nabataeans might have settled in what would become the capital city of their kingdom, as early as the 4th century BC.

Petra flourished in the 1st century AD, when its famous Al-Khazneh structure – believed to be the mausoleum of Nabataean king Aretas IV – was constructed, and its population peaked at an estimated 20,000 inhabitants. Famous for its rock-cut architecture and water conduit system, Petra is also called the “Red Rose City” because of the colour of the stone from which it is carved. UNESCO has described Petra as one of the most precious cultural properties of man’s cultural heritage. 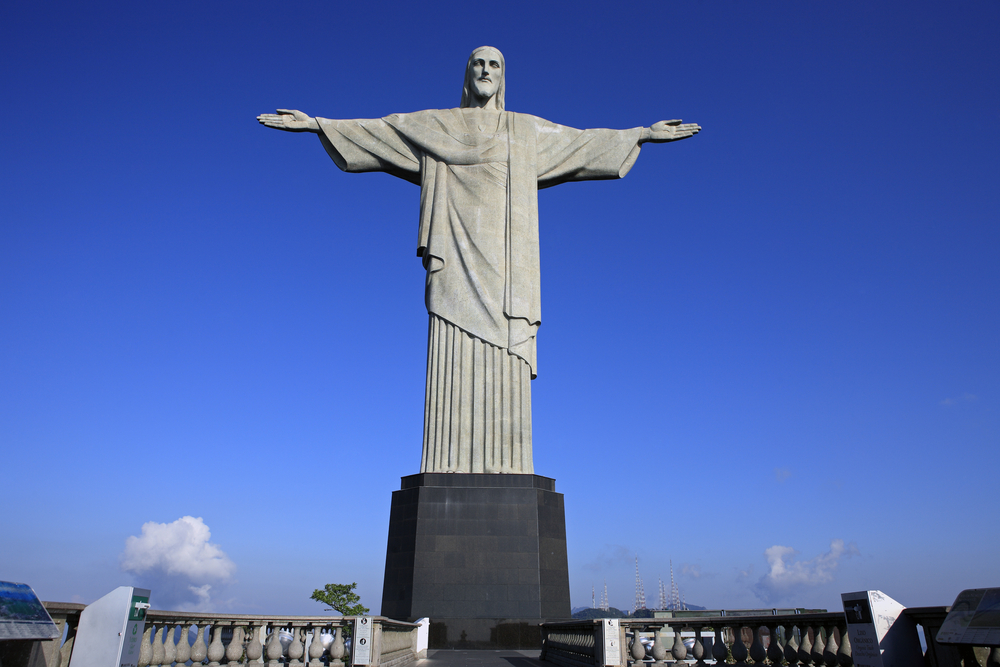 The arms stretch 28 metres (92 ft) wide. The statue weighs 635 metric tons (625 long, 700 short tons), and is located at the peak of the 700-metre (2,300 ft) Corcovado mountain in the Tijuca Forest National Park overlooking the city of Rio de Janeiro. A symbol of Christianity across the world, the statue has also become a cultural icon of both Rio de Janeiro and Brazil. It is made of reinforced concrete and soapstone. 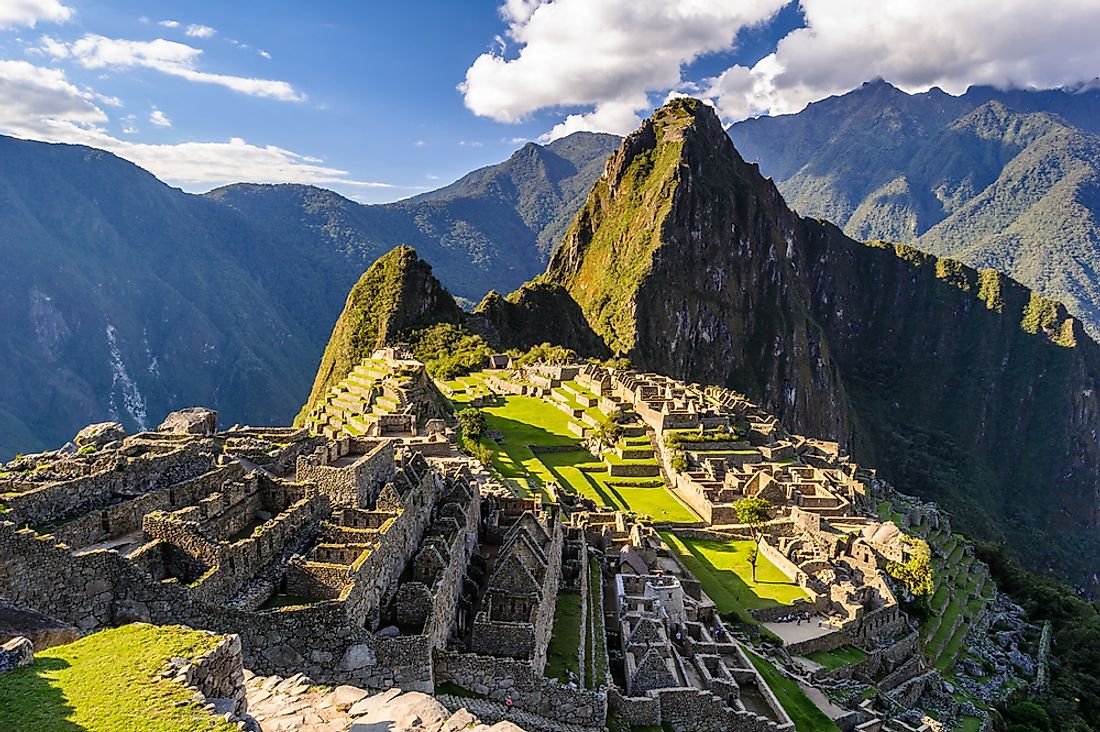 Machu Picchu is a 15th-century Inca citadel, located in the Eastern Cordillera of southern Peru, on a 2,430-meter (7,970 ft) mountain ridge. It is located in the Machupicchu District within Urubamba Province above the Sacred Valley, which is 80 kilometers (50 mi) northwest of Cuzco. The Urubamba River flows past it, cutting through the Cordillera and creating a canyon with a tropical mountain climate. Most archeologists believe that Machu Picchu was constructed as an estate for the Inca emperor Pachacuti (1438-1472).

The Incas built the estate around 1450, but abandoned it a century later at the time of the Spanish conquest. Machu Picchu was built in the classical Inca style, with polished dry-stone walls. Its three primary structures are the Intihuatana, the Temple of the Sun, and the Room of the Three Windows. Most of the outlying buildings have been reconstructed in order to give tourists a better idea of how they originally appeared. Machu Picchu was declared a Peruvian Historic Sanctuary in 1981 and a UNESCO World Heritage Site in 1983. 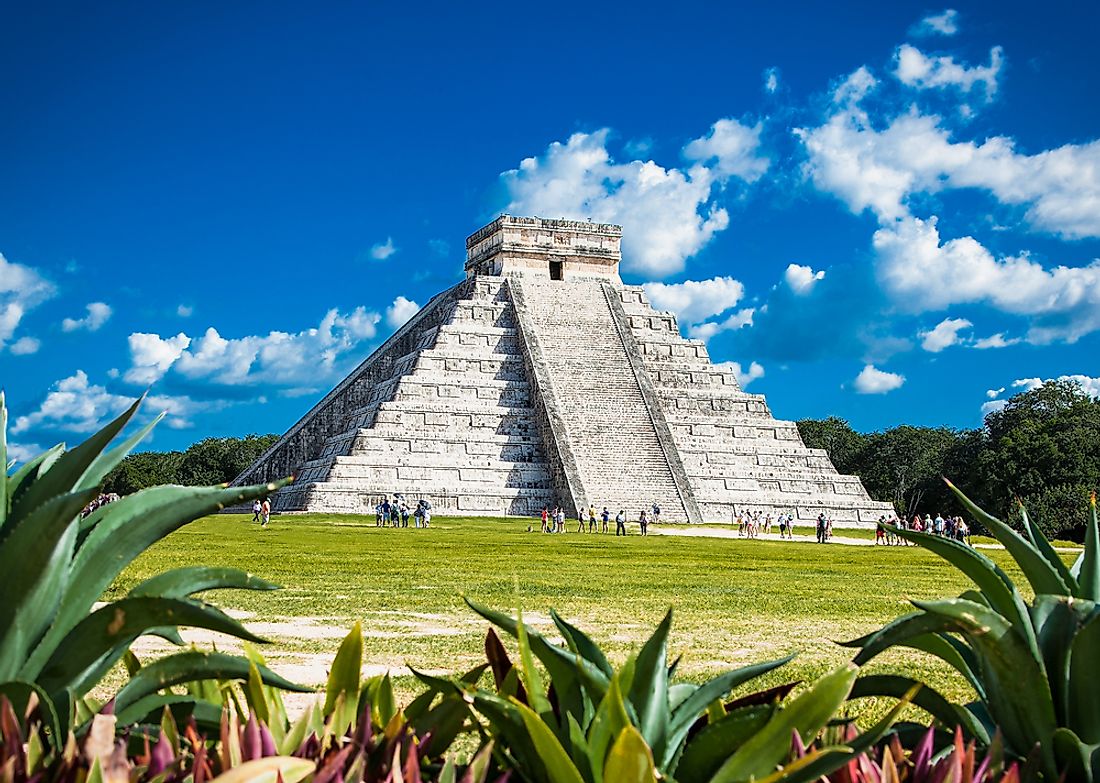 Chichen Itza was a large pre-Columbian city built by the Maya people of the Terminal Classic period. The archeological site is located in Tinúm Municipality, Yucatán State, Mexico. Chichen Itza was a major focal point in the Northern Maya Lowlands from the Late Classic (c. AD 600-900) through the Terminal Classic (c. AD 800-900) and into the early portion of the Postclassic period (c. AD 900-1200). The site exhibits a multitude of architectural styles, reminiscent of styles seen in central Mexico and of the Puuc and Chenes styles of the Northern Maya lowlands.

The presence of central Mexican styles was once thought to have been representative of direct migration or even conquest from central Mexico, but most contemporary interpretations view the presence of these non-Maya styles more as the result of cultural diffusion. Chichen Itza was one of the largest Maya cities and it was likely to have been one of the mythical great cities, or Tollans, referred to in later Mesoamerican literature. The city may have had the most diverse population in the Maya world, a factor that could have contributed to the variety of architectural styles at the site. 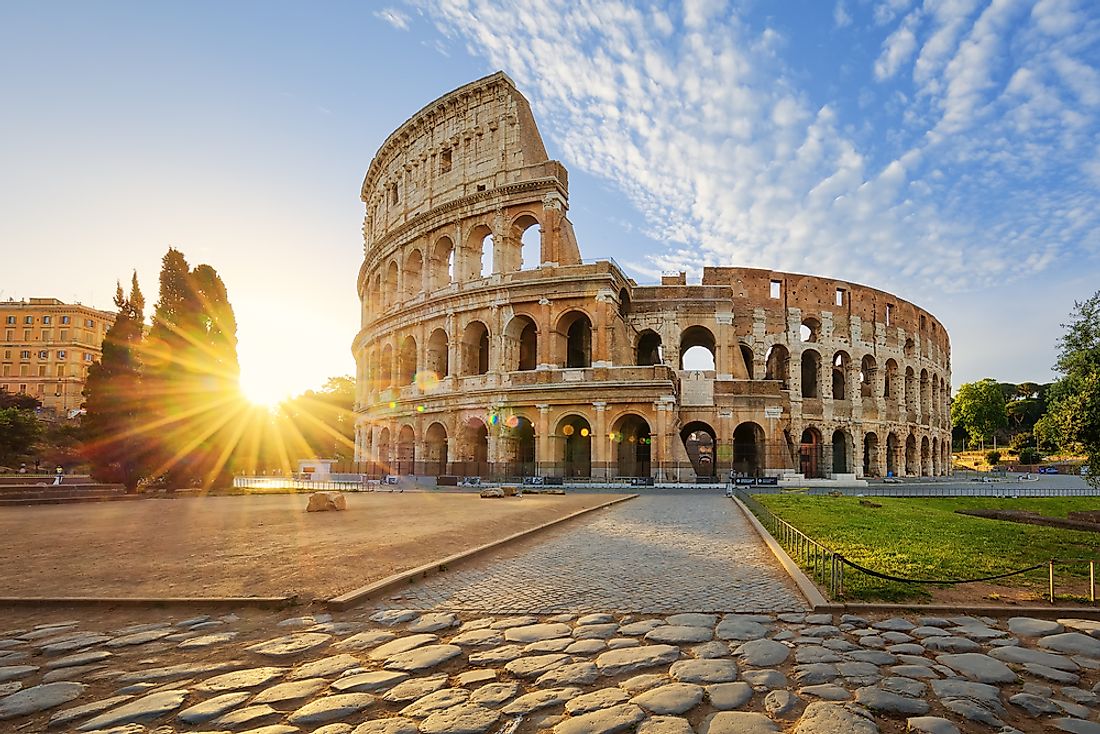 The Colosseum is an oval amphitheatre in the centre of the city of Rome, Italy, just east of the Roman Forum. It is the largest ancient amphitheatre ever built, and is still the largest standing amphitheatre in the world today, despite its age. Construction began under the emperor Vespasian (r. 69-79 AD) in 72 and was completed in 80 AD under his successor and heir, Titus (r. 79-81). Further modifications were made during the reign of Domitian (r. 81-96). The three emperors that were patrons of the work are known as the Flavian dynasty.

The Colosseum is built of travertine limestone, tuff (volcanic rock), and brick-faced concrete. The Colosseum could hold an estimated 50,000 to 80,000 spectators at various points in its history having an average audience of some 65,000; it was used for gladiatorial contests and public spectacles including animal hunts, executions, re-enactments of famous battles, and dramas based on Roman mythology, and briefly mock sea battles. Although substantially ruined, the Colosseum is still an iconic symbol of Imperial Rome. 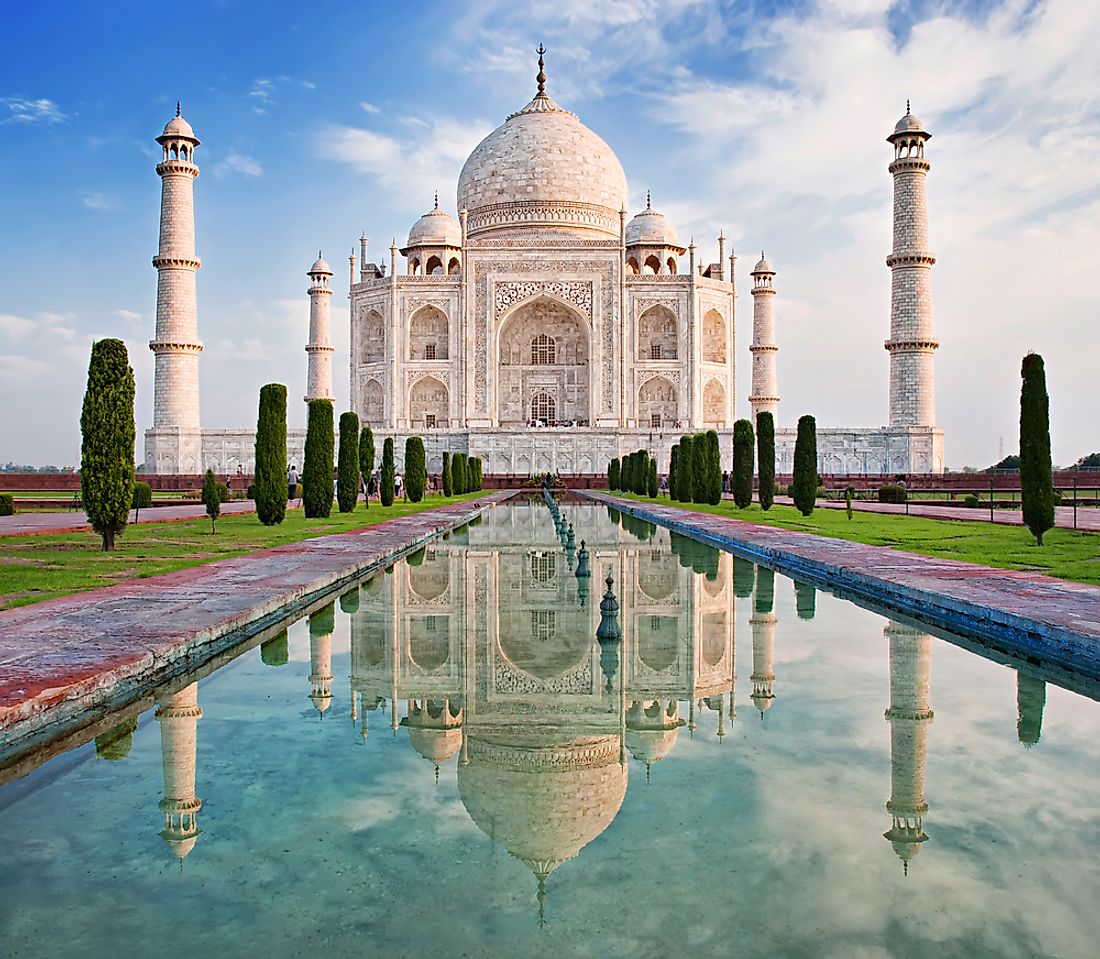 The Taj Mahal is an ivory-white marble mausoleum on the southern bank of the river Yamuna in the Indian city of Agra. It was commissioned in 1632 by the Mughal emperor Shah Jahan to house the tomb of his favourite wife, Mumtaz Mahal; it also houses the tomb of Shah Jahan himself. The tomb is the centrepiece of a 17-hectare (42-acre) complex, which includes a mosque and a guest house, and is set in formal gardens bounded on three sides by a crenellated wall.

The construction project employed some 20,000 artisans under the guidance of a board of architects led by the court architect to the emperor, Ustad Ahmad Lahauri. The Taj Mahal was designated as a UNESCO World Heritage Site in 1983 for being the jewel of Muslim art in India and one of the universally admired masterpieces of the world’s heritage. It is regarded by many as the best example of Mughal architecture and a symbol of India’s rich history.

Top 20 natural wonders of the world

Top 10 most expensive bicycles in the world 2022

Top 20 natural wonders of the world